Freddy is just about the most classic of all horror characters. He’s made killing so much fun for his fans. We put together a list of some of Freddy’s epic kills. Which one’s do you think we missed? Leave a comment at the bottom and we’ll include it next time!

Oh Sheila. Don’t you know that all work and no play makes you… dead? This little asthmatic bookworm is hard at work on a test when Freddy steps in and decides to give her a pop quiz on swapping spit. He grabs her face and starts sucking away like a mad vacuum, and as you can see there’s not much left of her when once he’s finished. Insert your typical Freddy quip, “You flunk”, and Sheila wakes up with a killer asthma attack.

This gal had big dreams of becoming an actress… unfortunately for her, she also had dreams about Freddy. She tries to stay awake by burning herself with cigarettes, but a talk show interview with Zsa Zsa Gabor proves to be too much for her to tolerate. She dozes off and that’s all Freddy needs. He makes the T.V. go out and she walks up to see what’s wrong. Freddy’s inside it, that’s what’s wrong you idiot! He pops out of the T.V. and picks her up, cackles “Welcome to Prime Time, bitch!”, and proceeds to ram her face first into the T.V. Then Laurence Fishburne walks into the room to find her corpse hanging from the set.

Kill #8: More Powerful Than A Loco-Madman!
(from “A Nightmare on Elm Street 5: The Dream Child”) 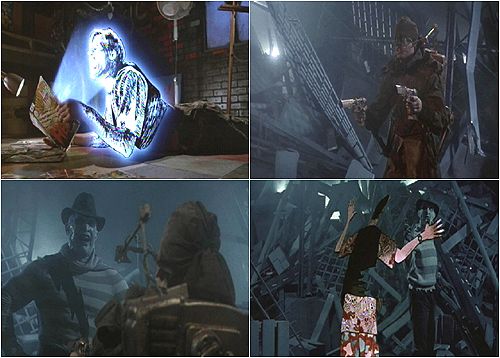 Here’s a good one, it’s easily among of the more creative and humorous Freddy kills. Mark is your stereotypical skater/punk with a love for comic books. At one point he’s going through his comics and notices a new “Nightmare” comic that he hadn’t seen in his collection before. He opens it up and gets sucked inside where Freddy teases Mark by showing him old girlfriend Greta (who was recently killed by Freddy too). This makes Mark furious and he uses his “dream powers” to become his own creation – an angry, gun-toting comic book hero. He blasts away at Freddy as paper confetti (instead of blood) flies everywhere from his wounds. I guess two can play that game, because Freddy pops back up and has transformed into SUPER FREDDY! “Faster than a bastard-maniac, more powerful than a loco-madman, it’s Super Freddy!” You gotta love his way with words. He then slices Mark apart and the color ink drains from his lifeless body. 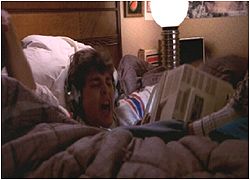 Johnny Depp sure has come a long way since he first started out? He’s sitting on his bed with his headphones on while watching T.V. You’d think that’d be enough entertainment to keep him awake, but he still manages to doze off. Freddy then bursts through the mattress and pulls Johnny down into it. A few seconds pass and then a ridiculous amount of blood spews out from the hole in the bed. And when I say ridiculous, I mean ridiculous. There’s just no way that Johnny’s little body contains that much blood. Way over the top and a great way to start off the series. The amount of blood that comes out of that bed almost rivals the blood in Dead Alive. I guess that’s why I love this scene so much. 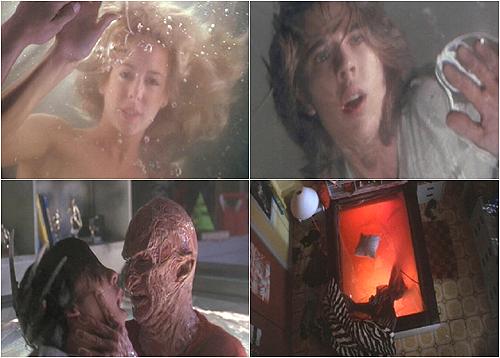 Joey is probably the horniest character in the entire elm street series. In part 3 he almost got killed after he fell for Freddy who was posing as a seductive nurse. This time, he falls asleep only to find that the bikini girl from the poster on his wall is now swimming inside his water bed. Minus the bikini… naturally. Joey gets all excited, but she quickly swims away and Freddy pops up instead. “How’s this for a wet dream??” he laughs as he drags Joey underwater and cuts him up. In the morning when his mom comes in to wake him up, she finds that her son drowned inside the water bed. So the lesson here: Don’t be a sleepy perv or Freddy will find a way to kill you… or at least ruin your waterbed.

According to Taryn, a former junkie, she’s “Beautiful… and BAD!” in her dreams. She puts up a noble effort against Freddy with her switchblades. She even stabs him in the armpitat one point. I dunno, maybe that’s a vital point that I wasn’t told about, but if Freddy was coming after me, I’d start stabbing him in the face. For some reason, I think those two spots would do a little more damage than the armpits. Freddy decides to try a different approach to his attack.

The old tracks in her arms form little mouths and you can just tell they’re craving the sweet nectar that only Freddy’s drugs can provide. So he fills her up with the drugs and she’s gone.

Kill #4: D&D Dorks Can’t Even Fight In Their Dreams!
(from “A Nightmare on Elm Street 3: The Dream Warriors”)

Our nerdy friend here has been confined to a wheelchair for quite a while, but in his dreams he can walk. That is, until Freddy slices up his legs. But the lil’ nerfherder has some fight left in him yet… he gets “angry” (if you could call it that) and turns into “THE WIZARD MASTER!” He zaps Freddy with some green tree elf lightning or something stupid like that. Freddy then picks him up without any effort whatsoever and says, “I don’t believe in fairy tales, kid.” and proceeds to stab dorkboy in the heart with his patented glove. Freddy cheated though, he didn’t roll his 27-and-a-half-sided dice. It wasn’t his turn to attack! Somebody report him to the game master quick!

Kill #3: Vacancy In The Roach Motel!
(from “A Nightmare on Elm Street 4: The Dream Master”) 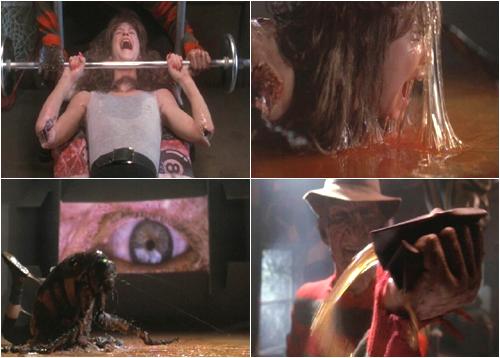 Debbie sure is in good shape. She works out all the time… pumping iron, the works. But is she buff enough to handle Freddy? Nope. He pushes down on the weights while she’s doing a bench press, eventually snapping both of her arms at the elbows. “No pain, no gain!” he chuckles. As if that wasn’t insult enough to her physique, she runs down the corridor only to land face first in a bunch of slimy goop. Her face soon falls off and she has now been transformed into a friggin’ cockroach! Freddy looks in on Debbie and then crushes the roach motel which she was trapped in. Well, if he ever wants to give up his work in the killer maniac business, he’d probably do pretty well working for Orkin. 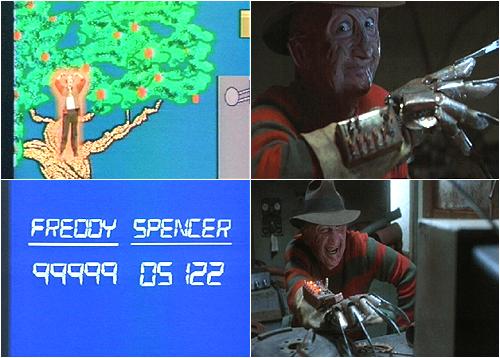 Spencer, played by Breckin Meyer ( Clueless, Road Trip), enjoys drugs and doing whatever he can to not be like his overbearing father. Freddy invites Spencer to “take a trip” while he’s high, and he gets sucked right into the television. Now he’s in a video game (with great graphics!) fighting against both his father and Freddy. His dad beats him up with a tennis racquet for a while but Spencer finds a power-up in a nearby tree and does away with him. So, Freddy busts out his very own custom POWER GLOVE and really starts laying into Spencer. In the end, Freddy kills off Spencer and even beats his personal high score. Not to be cocky, but I still think I could kick Freddy’s ass in Pac Man.

Kill #1: Rick, You Little Meatball!
(from “A Nightmare on Elm Street 4: The Dream Master”)

Freddy meets up with Alice in her restaurant and informs her that, “if the food don’t kill ya, the service will!” Freddy ordered what I’m sure Pizza Hut will soon be picking up on… a pizza with human-head-meatballs! Gotta love it when Fred digs his claw into Rick and eats him. It’s funny, it’s nasty, it’s everything that an Elm Street movie should be.

Review: JESUS SHOWS YOU THE WAY TO THE HIGHWAY is Totally Bonkers — and That’s a Good Thing